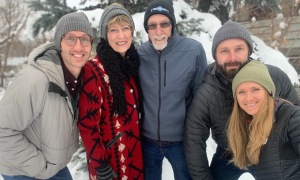 Don Emmett Stucky, M.D., 71, died October 17, 2020 of COVID-19 despite the excellent professional care of the medical team at the Oklahoma State University (OSU) Medical Center ICU South in Tulsa, OK. He was born January 4, 1949, the son of Glenn and Dorothy Stucky (Bailey) in Sidney, Montana. Don and Janet Louise Maxwell were married April 1, 1973 in the Westminster Presbyterian Church Chapel in Lincoln, NE.


While attending Lincoln Southeast High School in Lincoln, NE, Don participated in the 10-member male singing group, the Noblemen. He lettered in wrestling at weight class 138 and was in the top of his 1967 graduating class. Don earned a four-year National Merit Scholarship sponsored by World Book Encyclopedia that paved his way to Stanford University in Palo Alto, CA. At Stanford, he was selected to sing with the Mendicants, Stanford’s first all-male a capella group, which performed a variety of music on campus and in the San Francisco Bay area. Don’s solo was “Rubber Duckie.” He graduated in 1971 with a Bachelor of Arts Degree and then attended the University of Nebraska Medical Center College of Medicine where he received his Doctor of Medicine in 1975.

After Dr. Stucky completed his residency in Family Practice in 1978 at the University of Nebraska Medical College, he and his wife, Janet, moved to Tahlequah, OK to begin his two-year commitment to the United States Public Health Service (USPHS) at W.W. Hastings Indian Hospital. This obligation was due to a USPHS scholarship which he received to attend two years of medical school. The Stuckys found Tahlequah to be the perfect niche and stayed to raise a family.

Captain Stucky served the Cherokee people as a Family Practitioner in the USPHS. After retirement as a commissioned officer, Dr. Stucky continued his practice as a Cherokee Nation employee, making a total of 40.5 years of commitment to his patients and colleagues. Dr. Stucky received awards in appreciation of his outstanding cooperation and dedication to excellent health care for Native Americans. He took a 10-week Cherokee Language course, and he could often be seen practicing the Cherokee Syllabary during occasional breaks or leisure time.

Don was an active member of the Tahlequah United Methodist Church where he served on numerous committees and sang in the Chancel Choir for 34 years. His beautiful tenor voice blended well, and he was often asked to sing in trios and quartets.

Don was devoted to his family; nothing was more important to him. He was a complete enthusiast for every activity Bennett and Will pursued from Suzuki Stage Days (violin recitals) and Little League baseball games to High School Soccer, Choir, and the Northeastern Oklahoma Symphony Orchestra (NEOSO). He adored his wife and proudly supported Janet’s work for the Arts Council of Tahlequah and Tahlequah Feed My Sheep. Don’s 47 years of marriage to his soulmate were unparalleled. Together, Don and Janet were big endorsers of the Tahlequah community. They were members and devotees of the Tahlequah Community Playhouse where Don acted in “The Importance of Being Earnest” (March 1981), “Scapino” (November 1981) and “Belle Starr – the Bandit Queen” (April 1983). The Stuckys supported the NEOSO, Northeastern State University (NSU) Allied Arts, and the NSU Music Department. They were also patrons of the Tulsa Opera and Tulsa Ballet, for which they held season tickets for 42 years.

Don volunteered for the Indian Nation Soccer League (aka Tahlequah Soccer Club) where he was on the board of directors serving as president and referee coordinator. He also coached both of his sons’ teams. After Bennett and Will left the nest, Don returned to coaching Under-8 soccer and focused on the joy of playing a team sport. “What are the first three letters of fundamentals?” he would ask. “F-U-N. Fun!!!” came the reply from his enthusiastic young team.

Don was as passionate about the environment as he was about baseball. Recycling and composting were routine; he led by example and urged others to be equally concerned about their carbon footprints. As for baseball, Don owned nearly every ball cap from Major League Baseball teams. As a boy in Bozeman, MT, Don played baseball as often as he could. As an adult, he attended several home ballgames including the Dodgers, Rangers, Royals, Cardinals, and Yankees. He enjoyed following the stats and watching games on TV, especially the World Series. Of course, Don also liked football and basketball; he followed the OKC Thunder but never made it to go to a game.

Don learned to play the clarinet in junior high school. In Tahlequah, he took lessons from the late Joe Davis. Later, he thoroughly enjoyed playing in the NSU Communiversity Band where he was appointed first chair. Don was an avid gardener with houseplants too many to count, attractive landscaping with all plants labeled, and beautiful roses, which he generously shared with many friends. He was honored with the Nasturtium Garden Club’s Yard of the Month award. Don was also a voracious reader; he preferred holding books and magazines in his hands as opposed to electronic readers.

The Stuckys loved to travel; a stop at each National Park was on their bucket list. They enjoyed road trips to visit their sons, extended family and friends, and recently they were able to get to Italy nearly every year to be with friends who live on a hill outside Domodossola.

Don had regularly scheduled monthly pedicures. He enjoyed flashing his brightly colored toenails to anyone who would care to look. Don was a dedicated participant in the Help in Crisis, Inc. Walk a Mile in Her Shoes event, putting his ankle on the line for nine of the ten years. The one year he missed followed two back surgeries when it was not possible for him to walk. Likewise, Don (and Janet) supported the American Cancer Society’s Relay for Life; he was a 12-year survivor of renal cell carcinoma.

Dr. Stucky was engaging; he loved conversation and he never met a stranger. He was brilliant, funny, droll and insightful. Don enjoyed telling jokes and puns, many of which were classic “groaners;” Janet would beg him not to tell the “Troover” story again. He would correct grammar, spelling, and sentence structure – even on Facebook, where he was “Mr. Social” and delighted in keeping up with his many contacts.

The Stucky family is planning a Celebration of Life service when everyone can gather again safely. That evening there will be a “Don Stucky Story Night,” when family and friends can share their remembrances. The Dr. Don E. Stucky Memorial Scholarship has been established to benefit a medical student at the OSU College of Osteopathic Medicine at the Cherokee Nation.

Memorials in Dr. Stucky’s honor can be given electronically: CLICK HERE or copy/paste https://bit.ly/35YylYu to your browser.

Memorial contributions can also be mailed to:

Don was full of wit, humor, and genuine love for his fellow man. He will be remembered for the twinkle in his eyes, the big grin on his face, his tender and compassionate heart, and his recent closing statement, “Wash your hands, wear your mask, keep your distance, and stay in touch.”

~Family is requesting NO flowers or plants to be sent at this time. ~

To send flowers to the family or plant a tree in memory of Don E. Stucky, please visit our floral store.

You can still show your support by sending flowers directly to the family, or by planting a memorial tree in the memory of Don E. Stucky
Share a memory
© 2021 Hart Funeral Home - Tahlequah. All Rights Reserved. Funeral Home website by CFS & TA | Terms of Use | Privacy Policy