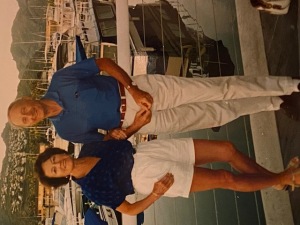 Gilda Germaine Landrevie Swiderski, residing in Tahlequah, took her last breath on May 29. She was surrounded by people who love her. There is no doubt that her husband of seventy-three years was anxiously awaiting her.

Gilda was born and raised in Paris. Her mother was British and her father was French. She grew up bilingual, learning English on frequent visits to family in London. She had a pleasant childhood with her younger brother, Jean Francois and her cousins. She studied ballet and wanted to be a ballerina. Then World War II broke out. She was a teenager during the German Occupation. Travel and food became difficult, but they managed. Gilda was eighteen when the Americans liberated Paris. Her life changed. My mother was quite a popular girl, not only was she pretty, but she spoke English! She loved to dance and learned how to jitterbug from the G.I.'s at the USO dances. She said they were always polite and respectful.

Gilda met my father, Fred, at a party. They were married about a year later and my father's assignment in Paris was extended for three more years. Then he was stationed in Fort Dix, New Jersey. It was quite an adjustment for a French girl, being away from family and with a nine month old daughter. Fortunately, my father's family lived nearby in Connecticut. They welcomed her with open arms and love that helped to ease her homesickness. They stayed close throughout their lives.

My parents enjoyed the military life, even though we moved frequently. My mother made friends easily. She and my father were a well liked couple and they had a nice social life. My father retired from the military after twenty years. He became a Foreign Service Officer, working through the Department of State. Then it was life overseas. Living in Korea and then the Philippines, while my father was in Vietnam, and Taiwan and Thailand. It was a nice life and we even had help!

Gilda and Fred moved to Napa, California after my father retired. It had been many years since they had lived in the United States. My mother was thrilled to have her own house at last and had fun decorating it. She enjoyed taking care of her flower garden. She loved Napa and had some French friends.

My mother was so happy to become a Grandmother to Nathan and Trevor. She would prepare the food they loved, read their favorite books before bed and try to teach them good manners.

When I spoke to my family about my mother, everyone had similar thoughts about her. This is what my friend wrote.

"Gilda was an elegant, articulate, inquisitive, lovely women who embodied all that is French. She was kind and fun to be with. I have fond memories of her and often, as you know, envied your relationship."

Gilda is preceded in death by her husband Fred, her mother Marietta, father Marcel, brother Jean Francois, her sister, also named Gilda and her son in law, Gordon Zabik. She is survived by her daughter Christina Uribe and her husband Luis, grandsons Nathan and Trevor Zabik and many nieces and nephews. Gilda was fortunate to have the kind and loving devotion of her care givers, Lori Dyer, Merry Carter and Tambre Dyer and Hospice of the Cherokee's, to them we are eternally grateful.

Memorial Service will be held on Thursday, June 10 at Hart Funeral Home in Tahlequah. Gilda will be buried at Fort Gibson National Cemetery with her husband Fred. In lieu for flowers please consider a donation to St. Jude's or Doctors Without Borders, her favorite charities.

To send flowers to the family or plant a tree in memory of Gilda Germaine Swiderski, please visit our floral store.