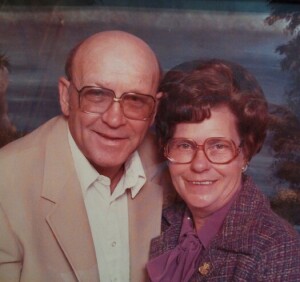 J.W. "Curly" Voyles was born January 8, 1929, in Blanchard, Oklahoma, one of five sons to Claud and Mary (Fenimore) Voyles. Dad passed away at home in Tahlequah on February 11, 2022. Dad fought hard and long for 1,502 days, after 4 iron Addie kissed the heavens in paradise to keep from getting whipped in every game and sport he played!

Both mom and dad grew up in Bridge Creek on small family farms. The work was hard and felt non-ending so when he and his brothers got to go to school, it felt like a vacation. On October 14, 1946, dad married mom; Addie Daily and then joined the United States Marine Corps. During this time, they started their family with a daughter; Marion LaJoyce. Following an honorable discharge, he graduated telegrapher school and moved to Kermit, TX to work for the railroad. While working on the railroad, J.W. and Addie welcomed their second child; Jerry Dale whom they lovingly called "knothead" to the family. Mom and dad owned their first full-service gas station in Duncan, OK. After that, he was selling Wynn's friction proofing for seven years across western Oklahoma. Dad drove over 300,000 miles in a '59 Chevy station wagon, another 200,000 in his '62 Ford van he called "the puddle jumper." Mom and dad returned to the full service station business in Bethany, and later operated different stations around OK. Shortly after, came the hamburger joint Mr. Swiss.. yuck!

In 1970, they purchased Tahlequah Auto Supply and the NAPA Auto Parts store. Mom and dad made a positive impact on their employees, instilling good work ethics and valuable life lessons. They had a way of making life and work an enjoyable experience. In 1987, they sold the business to Pat and "Knothead," which was the beginning of their retirement. Throughout retirement, J.W.'s "Honey Do" list never ceased. Winters were spent in Harlingen, TX golfing, and square dancing. The rest of the time was devoted to family and fun, if and when his "Honey Do" list allowed. On the fun side of life, there was golfing, fishing, and the Daily and Voyles families trying to splash Lake Duncan, Tenkiller, and others dry every chance they got. More fun and family times included attending the annual Fenimore reunions.


To send flowers to the family or plant a tree in memory of J. W. Voyles, please visit our floral store.