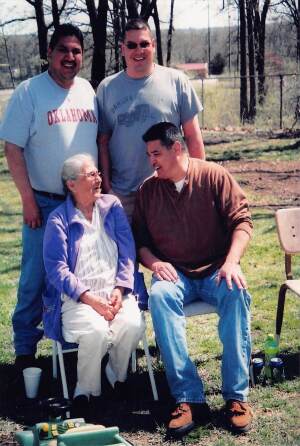 Andy attended Tahlequah High School, and, as a graduate pursued his career in Business at NSU. Andy took his first career job at Anthony's clothing store as a manager, where he fell in love with clothing attire. Later, he went on to work for the Cherokee Nation Businesses overseeing convenience stores, commodity foods, and career services with Diane Kelly, whom he admired and respected very much.

Andy loved working for the Cherokee Nation where he met a lot of his friends and co-workers. He loved his Indian people and loved to talk about it's culture, history, and the politics side.

Andy's pastime was watching O.U., Boomer Sooner (Baby) and Dallas cowboy football teams (where he would dream he was Drew Pearson, wide receiver of Dallas). Andy also loved holidays with family gatherings to eat and visit, and then play a round of catch with the football with the children and call them Butterfingers if they didn't catch it. Andy also liked playing the Wolf Game on the slots (trying to hit the big one). He liked spending time with Marissa and his dog Princeton for a walk.

Andy is preceded in death by his parents, Benny & Phyllis Dreadfulwater and his brother, Darrell Dreadfulwater. At his request, Andy passed away from this life at home, where he was raised. On September 25th, 2021, by his side were his children and family (he loved so much). He was 60 years old and will not be forgotten. Andy leaves behind his memories and (smile) to his four children, Matt, Brandt, Christine, and Drew, three brothers and one sister, Mike, Dale, Cynthia, Charlie & September, and Diane & Steven, his grandbabies, nieces, nephew, aunts, uncles, and many friends. Your smile will always be missed.

To send flowers to the family or plant a tree in memory of James Andrew Dreadfulwater, please visit our floral store.