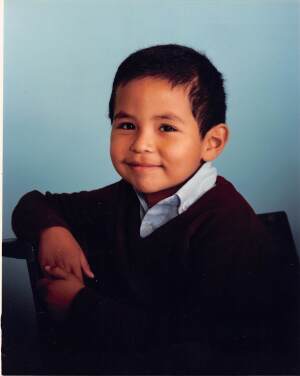 Joshua James was born June 2, 1983, in Claremore, Oklahoma. He stepped into paradise on May 7, 2021, in Tulsa. He was the youngest of four sons given to Margaret and Warren James. He graduated 2002 from Tahlequah High School where he lettered four years in football, basketball, and track. He made many great friends from this part of his life. Later he graduated from Northeastern State University with a major in criminal justice.

Josh's first job was being an actor at the age of 9 in the Tsa-La-Gi Tail of Tears drama at the Cherokee Heritage Center in Park Hill, Ok. He was employed for several years in Tahlequah before he went to New York City to work in the American Indian Community House. He served there for 3 years as a food aid worker and eventually manager. Upon returning to Oklahoma he moved to Tulsa where he found joy in being a chef. He was a chef at Emerald Falls in Broken Arrow-then at St. Francis Hospital where he cooked and prepared food for the terminally ill patients. He took pride in serving those who were suffering.

Joshua James was a natural "Warrior" all his life. He served, protected, accepted, guided all the people in his lifetime. He was a gentle giant who loved people...esp. his family! In the Indian way, when a family had a giant "Warrior", there was safety, love, and plenty of needs filled so a family didn't have to worry. In Josh's family he was the natural protector. And because Josh loved the Lord he was saved and baptized; so the journey he took for the rest of his life led him to do the greatest thing---he came back home to take care of his disabled father. He actually forgot about himself and was totally devoted to his father's care.

Joshua had the ability to sympathize and understand people in a deep and personal way. His never ending encouragement and honesty helped those around him to heal and to find peace. His sense of humor brightened everyones day and his quick wit kept you interested in what he had to say. He had four sight and intelligence that he used to analyze every situation and circumstance to find the truth of the matter. His love for sports, history, films, music, children, animals, friends, and family helped him to find the answers that he searched for. However, his rock solid hope and definite guide to life's problems were always found in the Bible. His faith in Christ was the very center of his being. It was the rock that he could stand on when the ground seemed to collapse beneath him. He would speak out scriptures when things got tough and remembered the promises he had in Christ. It brought him strength and reassurance in time of need.

Joshua was ¾ Choctaw and ¼ Creek. He was very proud of his heritage. He often spoke about the hardships of Native Americans and what we still go through today. He once gave a speech in college about the affliction and travails of his people that brought many in his class to tears. Afterwards they shook his hand and thanked him for his courage and devotion to tell the truth. In New York City a few people were amazed that was he not only pure blood Native American but that he was also from Tahlequah, Ok. They would ask him what it was like to live there and wondered if he came from a reservation. Indeed, they even inquired of him if Natives still lived in tee pees and rode on horses instead of cars. Like with everything he tried to not take it too personal, laughed, and shrugged it off after correcting them.

Joshua went to a Christian school for a short time as a child and it was there that he realized he was different from the other children. At Thanksgiving the children were given choices to be an Indian or a Pilgrim. Josh wanting to have a musket or rifle, so he opted to be a Pilgrim. However, the teacher wouldn't let him be a Pilgrim because he was an Indian and told him so. Josh didn't understand and was upset that he couldn't have one of those rifles. He told his mother what happened and sure enough, as she was known to do, she drove right back to the school and straightened out that teacher. She told the teacher that Josh could be whatever he wanted to be, even a Pilgrim if that's what he wants. After that Josh knew not only that he was different but that his teacher was scared of his Choctaw mother. In the end he got to have is rifle at Thanksgiving.

Joshua was known by many in Tahlequah as "Sox." There is a few stories going around about how he got that name. According to his friend. Asa, he got the name when he started the 4th grade in Tahlequah. The kids were picking teams for football at recess and he was so shy that no one knew his name. He frequently wore a Chicago White Sox shirt and whoever it was that picked him said "I'll take Sox!" The name stuck.
Joshua and his brothers were very close and in fact, were best friends. Many referred to them as the James Gang. They were competitive with each other, whether they were playing backyard football, basketball, or wiffle ball. They would even play hockey in their garage where Josh, was of course, the goalie. His favorite teams were The New York Yankees, The Pittsburgh Penguins, The Dallas Cowboys, and the Oklahoma Sooners. He had many favorite movies but a couple of them were Gladiator and Aliens. Like his films he had many different favorite musical artists, but Creedence Clearwater Revival seemed be the one band he enjoyed the most.

Josh's greatest achievement in life was conquering New York City, graduating college with a good degree and sacrificing all that he had achieved to come back to Oklahoma to care for his father. The Bible says,"Greater love hath no man than this, that a man lay down his life for his friends," and "Children are a gift from the Lord; they are a reward from Him."

Joshua is survived by his parents, Margaret and Warren, his brothers, Jeremy, Casey, and Seleetka, his uncle Nic Billey, his Aunt Silvia Dix, her son Jamey Dix, his nephew Faron Cason James, numerous cousins, and friends.

In lieu of flowers, if you wish to make a donation towards Joshua's funeral expenses please make the donation to Hart Funeral Home in Tahlequah.

To send flowers to the family or plant a tree in memory of Joshua James, please visit our floral store.